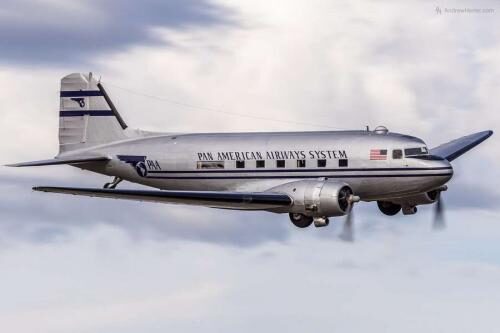 As war loomed and the Japanese invaded China, CNAC took on a much more important role than simply connecting people from across China. In 1940, they surveyed and constructed an aerial supply route over the Himalayan Mountains. This was the beginning of the route known as the “Hump.” By 1944 the “Hump” and CNAC were a crucial part of the American strategy for victory in the Pacific and C-47B 20806 was to be the 100th aircraft added to CNAC’s fast-growing fleet.

Ferried from Long Beach to Miami, 20806 continued to India. On arrival the plane’s American “stars and bars” were replaced by the CNAC “chung” insignia before the plane entered service flying over the “Hump.” 20806 went on to make hundreds of flights over the Himalayan mountains, ferrying supplies and personnel.

Flying over the Himalayan Mountains during WWII was one of the most difficult and dangerous aerial supply efforts ever attempted. The route over the high Himalayas stretched 500 miles over inhospitable terrain, with peaks rising to 15,000 feet between 10,000-foot valleys. Losses were very high, particularly for the India-China Division of the Air Transport Command (ATC) of the U.S. Army Air Corps. The ATC lost 634 transports over the course of the war—just a hair under their peak strength of 640 aircraft.

With the defeat of Japan and the liberation of China, CNAC resumed normal operations. The aircraft got a paint scheme very reminiscent of Pan American World Airways markings and passenger seats were installed. It was then selected for a special route—the very short hop between Kai Tak airport in Hong Kong and Canton in mainland China.

It was one of CNAC’s busiest flights, with between 5 and 6 round trips flown every day. Due to the high demand and short duration of the flight, the aircraft was fitted with more than 30 “seats”—really just benches running down the sides of the fuselage—and then another row down the center. With its wooden floor and cargo doors it probably left a lot to be desired from a passenger perspective and was nicknamed the “Air Bus.”

In 1949, CNAC relocated the rest of its fleet to Kai Tak. With nowhere to fly to, CNAC began dismantling the aircraft and preserving them against corrosion.

Then the Communist Chinese government sued for ownership of the fleet. In November of 1949, CNAC employees stole a dozen of the airworthy transports and defected to the mainland. The United States and the Nationalist government both wanted to prevent the Communists from getting any more heavy transports. In the meantime, Claire Chennault, founder of the famous ‘Flying Tigers’, negotiated the purchase of the CNAC fleet. Civil Air Transport (CAT) was established in Delaware and the entire fleet was registered with the CAA in December of 1949. 20806 was mistakenly registered at that time as serial number 4193. In May of 1950 a Hong Kong judge ruled in favor of the Communists, but after 3 years the UK Privy Council overturned that ruling. 20806 flew home!

Return to the U.S.

20806, now registered as N37800, arrived in the U.S. in May of 1953. CAT immediately sold the aircraft to Grand Central Aircraft Company in Glendale, CA. 20806 underwent an exhaustive six-month overhaul, the bullet-list of which stretches for more than 40 pages. Corroded fasteners and torn sheet metal were replaced, systems were overhauled, and upgrades were installed. Among the major modifications were the installation of an executive interior with reclining seats, two divans, a lavatory and a full stainless-steel galley. An air-stair entry door was installed, as well as long range fuel tanks and fuel dump valves.

Over the next few years 20806 passed through several owners, a bankruptcy and multiple lawsuits. In 1978, it was sold to the International Shoe Machine Corporation in Nashua, NH.

In 1996 the plane was sold again, this time to Victoria Forest & Scout who changed the registration to N877MG. Then in 2006, Historic Flight Foundation discovered the aircraft at a small upstate New York airport and acquired it for restoration.

Because the aircraft was registered with the CAA under the incorrect serial number 4193, and no records of it existed in the U.S. prior to 1949, the origin of the aircraft was a mystery. The only clues were in its equipment and configuration. Many of the aircraft’s modifications to give it long-range capabilities resembled the sorts of modifications made to Pan American World Airways’ aircraft in the years following WWII. Therefore, the Historic Flight restored the aircraft as a Pan Am airliner from the outside, but retained the original 1953 VIP interior.

Among the changes rolled back to return the aircraft to a more original configuration were the clamshell landing gear doors, retractable tail wheel, and radome in the nose. In the cockpit, the modernized instrument panel and yokes were removed and replaced with more traditional versions. The entire aircraft was re-wired and all new plumbing was run as well. All of its systems were overhauled, and the structure was given a thorough inspection. Much of the work was completed at Sealand Aviation located on Vancouver Island, British Columbia.