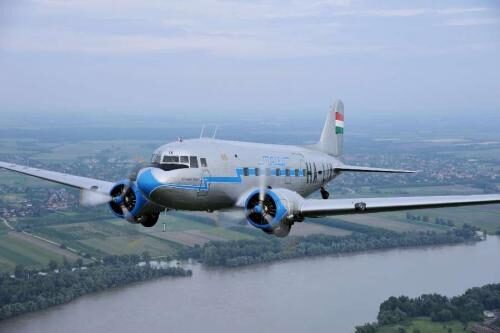 The Lisunov Li–2 is the Russian licensed version of the successful American Douglas DC–3 aircraft. The DC–3 took off for the first time on 17th December 1935. The Soviet Union got the license in 1936, and after some modifications of the original design, manufacturing started. The modifications were required by the applied metric units in Russia and the tighter Russian standards. The newly licensed AS–61IR engine was built in, which was less powerful than the American version. Since it had only 1000 horsepower, the Li–2 was slower and had lower climb rate. More than 5000 units of the original Li–2 (PS–84 type) were manufactured in the Soviet Union. Hungary operated 31 Li–2s in commercial and military configuration. It was the first aircraft type used by the first Hungarian airline after WWII: MASOVLET opened the first Hungarian and foreign destinations with Li–2s in 1946.

Malév used Li–2s until 1964, and after decommissioning, the aircraft were handed over to the military, to sport clubs (MHS) or were on public display at various locations. The military mainly used them to tow targets or for parachute jumping, until they ended their military service in 1975. The world’s only airworthy Li–2, the 1949 manufactured 18433209 serial number unit was assembled in Tashkent. After its completion, it flew to Hungary in the same year, and was commissioned in the Hungarian People’s Army. It was transferred with other similar aircraft to Malév in 1958, and got a civilian license. It was scrapped in 1974 and put on

display in Szolnok, in the collection of Kilián High School. Goldtimer Foundation transferred the airplane to Budaörs in 1997 to commence its full restoration.

The restoration works lasted 3 years, took 45.000 working hours. Li-2 took off again on 21st September 2001 from Budaörs. She became fully airworthy in April 2002 when she got her permit to fly again, which has been valid ever since.

It carries the original livery of the 1960’s Malév.

The HA–LIX registered Li–2 celebrated its 65th birthday in 2014. Since its 2001 restoration, she participated in various air shows and displays. Among others, it was in Berlin, Hamburg, Krakow, Sliac, Lelystad, Vienna, Friedrichshafenben, Rudnice and Pilsen. In 2014 she took part in the “Dakotas over Normandy” celebration, where parachutes jumped from it in a formation with ten C–47 and DC–3 aircraft, to commemorate the D-Day activities in France and England.

The aircraft is featured in a number of Hungarian movies, such as The Unburied Man on the life and death of Imre Nagy, the TV movie Szabadság járat, music movie Made in Hungary, as well as a number of British, American and Canadian World War 2 movies, featured as an allied C-47 military cargo plane. The aircraft flies from April to October each year and can be seen at the Budaörs airfield.