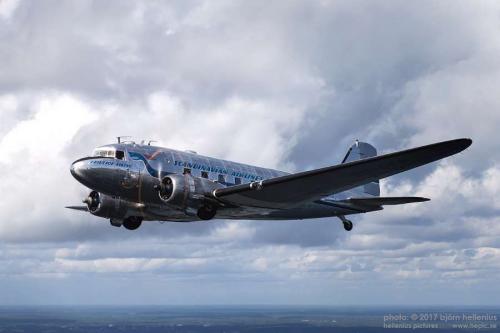 Daisy was manufactured at Douglas Aircraft Company’s plant in Long Beach in South Los Angeles, California 1943, with serial number (c/n) 13883, as a C-47 A-60-DL Skytrain, a military version of the DC-3 with large cargo door, strengthened floor and larger fuel tanks. She was delivered to the US Army Air Forces on 5 October 1943 as USAAF s/n 43-30732. On tail fin the number 330732 was painted.

Daisy was shipped directly to US Army Air Forces in October 1943 and was based in Oran in Algeria, where she transported troops, cargo and supplies. In 1944 she moved to England in preparation for the Allied invasion of occupied Europe. Daisy took part in the parachuting drop on D-Day on June 6, 1944, dropping members of “Easy Company”, the Role Models for the TV-serie “Band of Brothers”. Daisy is probably one of very few DC 3’s that was used for parachute jumping during WW2 and is still licensed to do this.

On 23 september 1945 she returned to the United States and was transferred to the Reconstruction Finance Corporation (RFC), an organization within the U.S. Government Administration that sold out military war surplus materials. In 1946 she was converted from a military C-47 to a civilian DC-3 of Canada Air Ltd. The conversion included the large cargo doors were replaced with an ordinary passenger door, the cabin soundproofed and she got more comfortable chairs.

After the conversion Daisy was sold to the Norwegian Aviation AS. In Norway, and given civilian registration number LN-IAF and the name Nordfugl. In 1948 Scandinavian Airline System, SAS, was formed by Denmark, Norway and Sweden. Nordfugl was now painted in SAS’ classic colours and given the name Fridtjof Viking, which she still carries. Daisy thus became one of SAS’ first airplanes.

Daisy was sold to ABA 1957 for use in the Swedish domestic airline, Linjeflyg, with the Swedishregistration SE-CFP.

In 1960 Daisy was sold to the Swedish Air Force. She was operated by the Swedish Air Force from 1960 to 1982 under the designation TP79. Daisy’s military number became 79006. Having first regained military cargo doors again at the Swedish Aviation workshops at Bulltofta, she was first based at F7 Såtenäs, and then at F Malmslätt. During her time in the Swedish Air Force, she was hired out to the Red Cross for humanitarian operations in Ethiopia. During the three months she transported 325 tonnes of supplies and 826 passengers.

Daisy was sold by the Air Force 1982 and 1983 to her present owner, Flying Veterans Foundation. Daisy is operated by Flying Veterans Association. The Foundation’s founder, together with voluntary forces conducted a comprehensive technical review and restoration to civilian condition of the aircraft. On 26 June 1984, she regained the same civil registration she had during her time with Linjeflyg, SE-CFP. And since 1984 Daisy is operated as a vintage airplane.