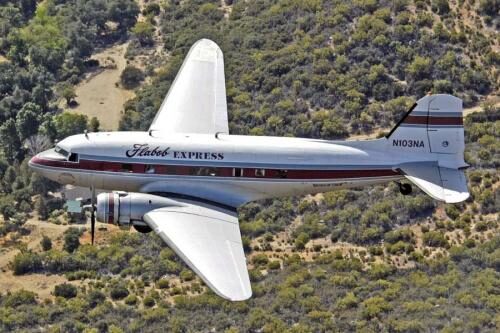 History of the Flabob Express. The “Flabob Express” carries a Douglas Aircraft data plate that identifies it as (C/N) 33569. This plate is a fake; in fact, the “Express “is really serial number 9531. How did it wind up with a phony data plate? In 1952, an American broker, Lee Mansdorf, bought seven C-47s from the Pakistani Air Force; the “Flabob Express” was one of the seven. When received by Mansdorf, the aircraft had no data plates, having been removed by the Pakistanis. Since airplanes need data plates to be registered, Mansdorf simply made bogus plates using a range of serial numbers. To add to the confusion, the bogus number 33569 he chose for the Express had actually once been assigned to another C-47 Dakota that was delivered to the RAF in 1945 as KP267. This Dakota served in South East Asia after World War II, and then returned to the UK where it was broken up for parts in 1953. So the Express was given the serial number of an aircraft that no longer existed. Mansdorf returned the aircraft to service and it was eventually registered multiple times in Canada and the US with its fake number. . . Once registered with both Transport Canada and the FAA, it was an impossible task to correct. Most historians lost the trail of the “Express” since the records illogically showed that 33569 were broken up for parts in 1953. Since the airplane was obviously alive and well, the confusion threw off effort to find the real history. Luckily, British DC-3 historian J.M.G. Gradidge solved the mystery. Gradidge is the world expert on DC-3 history having spent 50 years researching every aircraft possible. The Bible for DC-3/C-47 history is Gradidge’s “DC-3 the First Seventy Years, Air Britain, 2006.” The true history of the Express was uncovered by Gradidge. Here is the real history of the Flabob Express, Douglas serial number 9531. Early 1943: Serial number 9531 was manufactured in Long Beach and delivered to the Army Air Force as USAAF 42-23669 May 20th, 1943. 9531 was transferred to the Royal Air Force, ferried to England, and assigned to RAF no 24 Squadron at RAF Hendon near London. The Squadron Badge is shown on the left. The motto is translated by the Brits as “In all things prepared,” but Yanks would go for the breezier “Ready for Anything.” The RAF serialled it as FD879. The mission of 24 Squadron was VIP transport for the Royal Family and leaders of state, and it was conveniently based at Hendon in North London, now the site of the RAF Museum. Its squadron codes were NQ and U. It follows that there is every possibility that FD879 flew members of the Royal Family as well as Winston Churchill, since that was the single role assigned the four Dakotas assigned to 24 Squadron. Previous owners of the “Flabob Express” claim they have seen the original RAF log books showing flights with Sir Winston Churchill and Princess Margaret as passengers. July 1st 1943: FD879 was ferried to India where it served with Air Command South East Asia Communication Squadron. Here it serves as the personal aircraft of General Auchinleck who earlier had fought Rommell in North Africa. General Auchinleck (later Field Marshall Sir Claude John Eyre Auchinleck) named FD879 ‘Orion” Jan.14, 1947: Upon Auchinleck’s retirement, FD879 was reassigned to India Communication Squadron, RAF. Aug 14, 1947: Removed from RAF service and assigned to number 6 Squadron, Pakistani Air Force. April 2nd 1952: Purchased by Lee Mansdorf, shipped by sea to the US. Registered in the US as N2701A. Later sold to D.W. Connor who registered it as N42F. 1954: Modified as an executive transport by Remert Warner of St. Louis Missouri. Nov 7th, 1955: Imported to Canada, registered as C-FIKD. Purchased by T. Flahieff. Sept. 30th 1958: Executive transport for Ontario Paper Company. April 15th 1965: Sold to Dominion Tar & Chemical Co. Ltd., Montreal.1 August 10th 1967; Sold to Laurentide Aviation Ltd, Montreal.2 Feb. 19th 1971: Sold to Eden Air of Canada. December 1971 to June 1976: Winnepeg, Canada where it becomes derelict on the ramp. 1984: Purchased and returned to flight by Ilford-Riverton Airways of Canada, a regional carrier in Northwest Canada. Later sold to Air Manitoba another regional carrier out of Winnepeg. 1993: Imported to the US as N103NA and now flying from Flabob Aiport as the “Flabob Express